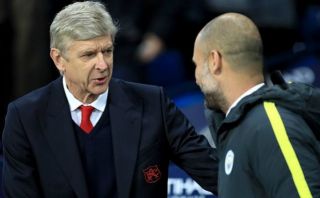 Arsenal face Manchester City in a daunting Premier League contest this evening – just days after being swept aside by the same team in the Carabao Cup final at Wembley.

The Gunners were beaten 3-0 by Pep Guardiola’s men on the day, making it six goals they’ve conceded against them in total this season – and there’s little reason to think it won’t be more tonight.

If that does prove to be the case, stats from BBC Sport show this would see Arsenal equal an unwanted record of theirs from all the way back in 2002.

Arsenal are currently on a run of nine league matches without a clean sheet, and if they concede against City tonight it will be the first time they’ve gone ten in a row without keeping their opponents out since February 2002.

This would be extremely damning for Arsene Wenger’s struggling side, who have made a dire start to 2018, with a series of poor results threatening their place in the top four once again.

BBC Sport’s stats also suggest a goal is highly likely for City tonight, not least because they have the prolific Sergio Aguero in their ranks, and he boasts an incredible record of scoring in each of his last five appearances against Arsenal.

Even without the threat of Aguero, City have world class attackers all over the pitch in the form of Leroy Sane, Kevin De Bruyne, David Silva and others, which is why they have scored in all but one of their top flight matches this season.

Petr Cech is still stuck on 199 clean sheets – and it looks like he’ll have to wait a little longer!