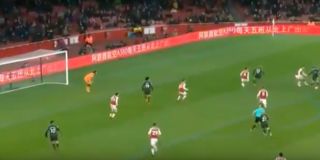 Manchester City star Bernardo Silva scored the pick of the goals as Pep Guardiola’s side ran riot away to Arsenal in tonight’s Premier League clash at the Emirates Stadium.

The Portuguese playmaker curled in a beauty with his left foot to make it 1-0 to City after 15 minutes, but it was all about the quality of Leroy Sane’s dribbling and vision in the build-up as he picked up a superb assist.

Watch below as Sane beats three Arsenal defenders on the left-hand side before driving forward and picking out Silva to curl it home from the edge of the box.

City fans will be used to this quality of football by now, but it’s certainly exciting to see Sane blossom into such a top talent, while Silva is another who’s improved immensely as this season’s gone on.

The former Monaco man wasn’t a regular earlier on in the campaign, but has had more opportunities recently and taken them with both hands.

Arsenal simply had no answer to City’s quality tonight as they slumped to their 7th defeat of 2018 – more than any other Premier League side in that time.

Few have had much joy against City this season and it’s easy to see why, but it’s grim times indeed for the Gunners and their supporters.