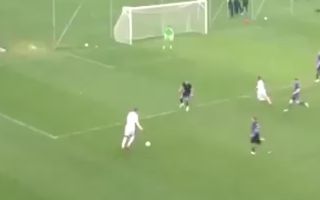 It’s fair to say that former Arsenal striker Niklas Bendtner has still got the touch in front of goal on the basis of this fine strike in training.

It may surprise many to know that the Danish forward is still just 30 years of age, as he seems to have been around forever following spells with Arsenal, Wolfsburg and Nottingham Forest.

He had been scoring plenty of goals for Rosenborg, bagging 21 in 49 appearances last season, but TV2 in Denmark report on how he’s being linked with a move to China to join Beijing Guoan.

Based on this kind of finishing, it’s no surprise that he’s a wanted man, but it remains to be seen whether or not he continues to ply his trade in Europe or opts for a potentially lucrative deal in the Far East.

Following on from that unsuccessful spell with Forest, time will tell if another English club would be willing to give him another opportunity. As he showed with Arsenal, he can be a quality finisher in front of goal, but ultimately it’s been a case of consistency and staying focused.

Regardless, there are bound to be a few more clubs other than Beijing who might want to see this for their side…