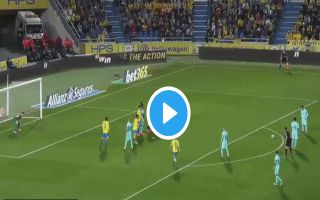 Barcelona were held to a 1-1 draw by Las Palmas on Thursday night as they suffered a blow in the La Liga title race, but Lionel Messi treated us to this superb free-kick.

Having dropped more points, that leaves Atletico Madrid just five points behind Ernesto Valverde’s side ahead of the meeting between the top two at the Nou Camp on Sunday.

In turn, that puts a lot of pressure on that clash as Barca have started to slip since last month, having now been held to draws by Espanyol, Getafe and Las Palmas.

It’s far from ideal as they boasted a healthy lead not so long ago, but perhaps this game proved that they can’t continue to rely on Messi to bail them out of trouble with others needing to step up in crucial situations.

As for the Argentine though, he’s now got 31 goals in 40 games this season along with 16 assists, and so he’s having yet another brilliant campaign to help lead Barcelona to success.

However, both he and his teammates will need to find their best form at the weekend, otherwise they risk putting themselves under real pressure to win the title this season with Atleti hounding them down.

Nevertheless, it’s always worth appreciating class when we see it, and this bullet free-kick from Messi is absolutely sensational…