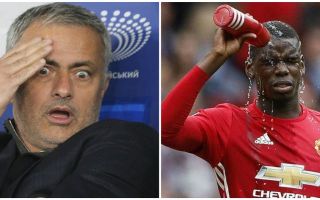 Man Utd haven’t been afraid to spend big when they feel a player is worth the investment, now an £80m target’s agent has given him the big build up.

The Red Devils took Paul Pogba back to Old Trafford in 2016, spending £89m to prise him away from Juventus to bolster Jose Mourinho’s squad.

SEE MORE: Jena Frumes has some solo fun without Jesse Lingard as Manchester United WAG performs in her underwear while singing into a mop

Now, Mateja Kezman, has revealed his belief that his client, and Lazio ace, Sergej Milinkovic-Savic has shown enough to be considered better than the French international.

There’s no denying that the 23-year-old has improved significantly and is worthy of the interest in him, with United linked with making an £80m bid for him, as per the Metro.

He’s bagged 11 goals and eight assists in 34 appearances so far this season and has all the attributes required to succeed at the top level. He hasn’t quite been on that stage yet, but his agent seemingly believes he’ll have no problem when he gets there based on the quality he has shown so far.

‘When Sergej came to Italy, he was compared with Pogba, because at that moment it was probably the easiest comparison to make in terms of characteristics,’ he told Mozzart Sport.

“I do really respect Pogba, let’s be clear, and other players who can run and work for the team, but I think now Sergej has different and better qualities than Pogba.

“Over the last six months, he has made enormous progress at Lazio. If he retains his health, he can become the most complete player on the planet. He has remarkable attributes and you’ll not find another player in the world with that power, muscular strength and height combined with technique and tactical awareness.

“He has the touch of a Brazilian and some of the things he does reminds me of Zinedine Zidane. He can score goals in a variety of ways and has a good head on his shoulders.

“I’ve played with Arjen Robben, Frank Lampard and some of the best in Europe and I think Sergej can surpass them if he keeps this up. He could soon be a candidate for the Ballon d’Or.”