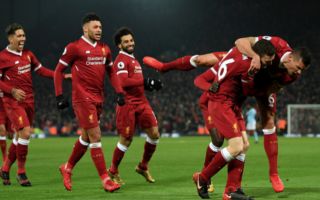 Liverpool fans were over the moon with Alex Oxlade-Chamberlain’s performance during their win against Newcastle at Anfield this evening.

Liverpool took the lead against Rafa Benitez’s side late in the first half through Mohamed Salah, who bagged his 24th league goal of the campaign.

Sadio Mane then doubled the home side’s lead to seal the deal for the Reds, who are now second in the league following their win today, leapfrogging their fierce rivals Manchester United in the process, who themselves take on Crystal Palace on Monday night.

Following the match, fans took to social media to laud Oxlade-Chamberlain for the display he put in against the Magpies this evening.

The England international, who joined the club for £35M in the summer as per BBC, was a lot of fans’ man of the match, with the former Arsenal star looking dangerous every time he got on the ball for Jurgen Klopp’s side.

Here are a few select tweets from fans praising the midfielder for his performance at Anfield today.

Alex Oxlade Chamberlain amongst others was phenominal

Oxlade Chamberlain is a prime example of good coaching, he’s developed more in 6 months under Klopp than his entire career under Wenger!