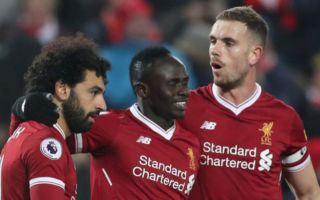 Liverpool cruised to a 2-0 win over Newcastle today, as the Reds leapfrogged rivals Man United to go second in the Premier League table.

The home side opened the scoring just before half time, as Mo Salah bagged his 24th league goal of the season to give the Reds a lead going into the break.

Jurgen Klopp’s side then doubled their lead in the 54th minute, after Sadio Mane slotted home after being put through by Roberto Firmino.

Mo Salah was brilliant today for Liverpool, with the Egyptian going level with Harry Kane in the race for the Premier League Golden Boot.

Salah was always causing trouble for the Newcastle defence this evening, and is fully deserving of the man of the match award for his performance.

This tweet sums up the forward’s performance well today

Salah has been on absolute fire this season!

26 – Big 5 Euro League players to score in the most competitive club matches this season:

It wasn’t all about Mo Salah for Liverpool this evening!

MOTM is really difficult when the pretty much everyone plays well, but I think Oxlade-Chamberlain driving the play and an overall solid performance makes me give it to him again.

Anyways, great 3 points. We will have games like these but a brilliant Mané goal does it. Oxlade Chamberlain MOTM, superb. Can’t wait for Tuesday ??