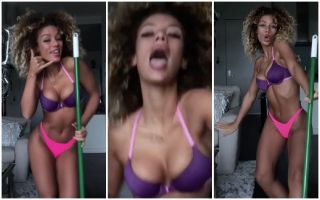 Instagram sensation Jena Frumes proved that WAGs don’t need their footballing partners to have a good time as Jesse Lingard’s sizzling other half treated her followers to a solo performance of Ain’t No Mountain High Enough.

Model Frumes, who has been dating Manchester United star Lingard since last year, wore a pair of pink knickers and a purple bra as she sang into a mop while dancing around an apartment.

The eye-catching video was uploaded to Instagram from California on Friday, with Frumes captioning it: “If you don’t wake up this happy with this much energy every morning, go back to sleep and try again!!!”

While his missus was bouncing around in the States, Lingard was in England presumably wearing slightly more clothes to deal with the sub-zero conditions brought about by Storm Emma and the Beast from the East.

Lingard and his Red Devils teammates are due to take on Crystal Palace at Selhurst Park on Monday night.

United have won their last five matches against Palace in all competitions, beating them 4-0 at Old Trafford earlier this season.

Jose Mourinho’s men start the weekend in second place in the Premier League table but they could have dropped down to third by the time they kick off on Monday as Liverpool, currently two points behind, host Newcastle on Saturday evening.

United and Liverpool play each other on March 10.

if you don’t wake up this happy with this much energy every morning, go back to sleep and try again!!! ?