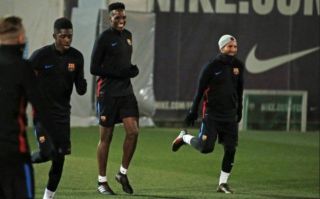 Barcelona and Argenina superstar Lionel Messi is eager to see new signing Yerry Mina to depart the Camp Nou, however only on a temporary basis.

This is according to Diario Gol, who are reporting that the Blaugrana forward has said that the club should allow the Colombian defender to leave the club on loan, with Messi himself suggesting fellow La Liga side Girona as a possible destination for the centre back.

Since joining Barcelona, Mina has struggled for game time and has seen himself left out of Ernesto Valverde’s squad for matches in recent weeks.

The 23-year-old has only been able to amass a total of two appearances since his January move from Palmeiras, with one of these being just seven minutes against Valencia in the Copa Del Rey.

Mina’s physicality is most likely one of the reason’s as to why Barcelona went for him, as the Colombian stands at nearly two metres tall, making him one of the tallest players at the club.

Despite this, Mina has yet to break into the first team at the Camp Nou, with it remaining to be see whether the Colombian will be able to cement his place in Valverde’s starting eleven with the Blaugrana in the near future.