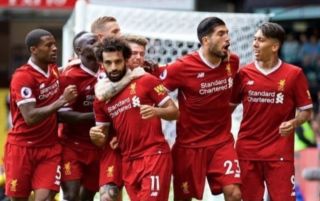 Liverpool manager Jurgen Klopp is keen on tying in-form forward Roberto Firmino down to a new deal with the Merseyside club.

This is according to the Sun, who are reporting that the Reds boss has stated that the club are eager to offer the Brazilian a new deal to keep at Anfield for longer.

Speaking about Firmino, Klopp said “[The new contract] is very important for both sides. It is never sure but of course it is important to keep these players who are at a good age and when there is still space for improvement. There is no doubt we want to do that.”

So far this season, Firmino has proven to be one of the best forwards in the entire Premier League, with the Brazilian constantly showing that he has the guile and ability to lead the line for the Reds.

The Brazilian, who joined the club from Hoffeheim for £29M as per the BBC, has managed to clock up an impressive total of 22 goals and 13 assists in just 39 appearances.

Firmino’s ability to play as an ‘out-and-out’ striker, or one that drops deep to collect the ball, has seen Liverpool become one of the most dangerous attacking teams in the whole of England.

The former Hoffenheim star’s ability to link up with fellow forward Sadio Mane and Mohamed Salah has gone along way to the Reds being the second highest scoring side in the Premier League, with only Man City ahead of Klopp’s side in that area.

Should Liverpool manage to tie Firmino down to a new deal, it’ll be music to the ears of Reds supporters, who would hate to see the 26-year-old depart Anfield any time soon.