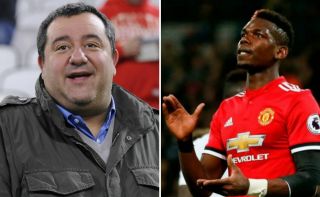 Manchester United star Paul Pogba is happy at the club at the moment but his agent Mino Raiola says he’s ready to get him a transfer away if things change.

The France international has not had the easiest of times at Old Trafford this season, with various reports suggesting he’s had a row with manager Jose Mourinho over his best position.

Having largely played in a more attacking role at former club Juventus, Pogba has been given more defensive work by Mourinho at United, and it doesn’t seem to suit his game.

Real Madrid and Barcelona have both been linked with the 24-year-old in recent times, but Raiola says there is no issue with Mourinho for the time being.

Still, the super-agent did suggest he was ready to get his client a big move if he does decide he wants an escape from Old Trafford any time soon.

‘I don’t take anyone anywhere, I’m not a taxi or a plane,’ he said.

‘Of course, if things weren’t going well than I’d be ready to do my job, which is to find other solutions for the club and the player.

‘There’s no war with Mourinho though, Paul wants to win with Manchester United.’