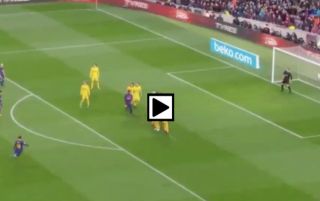 Barcelona superstar Lionel Messi scored his second free-kick in just four days to put the Spanish giants a goal to the good against Diego Simeone’s side at the Camp Nou.

In a very important clash at the top of La Liga on Sunday, Messi showed the world exactly some tout him as the greatest of all time, as the 5-time Ballon D’Or winner curled a fantastic 25-yard free kick past Jan Oblak in the Atletico goal to give his side the lead.

Should Barcelona win the match, they’ll find themselves eight points clear at the top of La Liga, a lead that they should be able to hold on come May and see themselves crowned champions of Spain for the third time in four seasons.

The strike was Messi’s second set-piece goal in just four days, as the ace bagged another superb strike against Las Palmas in a match that the Blaugrana ended up drawing 1-1.

Here’s a clip of Messi superb strike to give Barcelona the lead in the top-of-the-table clash at the Camp Nou.