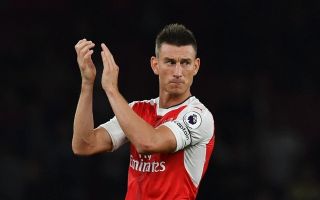 Arsenal are reportedly preparing to use Laurent Kosicelny in their bid to prise Jose Gimenez away from Atletico Madrid this summer.

The 32-year-old has been a consistent part of the Gunners backline since joining the club in 2010, making 317 appearances in all competitions.

While he has been considered one of the top defenders in the Premier League in the past, the veteran stalwart is starting to look suspect at the back, a problem that is damaging Arsenal in general as they’ve not been anywhere near good enough defensively this season.

Arsene Wenger’s side have conceded 41 goals in 29 Premier League games so far this year, giving them the worst defensive record of the top seven sides in the league. Koscielny isn’t solely to blame for that, but he hasn’t done enough to improve the situation.

In turn, that has now seemingly led to speculation that he will leave the Emirates this summer, with El Gol Digital, as re-reported by The Express, noting that the French international could be used in a swap deal for Atletico Madrid’s Gimenez.

In contrast to the Arsenal ace, the Uruguayan international is just 23 years of age and is an option to freshen things up at the back and improve the side defensively.

Having already racked up 113 appearances with Atleti, he’s gained plenty of experience at a young age and so could arguably be considered an upgrade with a long-term plan in mind at Arsenal.

Koscielny’s experience will be a loss if he does move on, and he is seemingly a strong voice for the current group as he spoke publicly this week about their recent struggles, as per The Guardian.

Nevertheless, with Arsenal staring another miserable and underwhelming campaign in the face, they could be well advised to start making big changes like this one to freshen things up and start to rebuild the squad as the current options evidently aren’t delivering the desired results.

Chelsea in pole position to seal transfer of want-away star in move that could have repercussions for Liverpool May 19 2021, 12:10
Chelsea FC