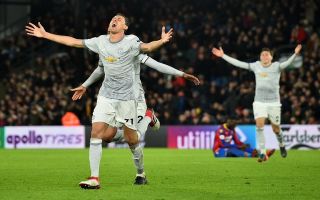 Man Utd pulled off an incredible comeback against Crystal Palace on Monday night, securing a 3-2 win at Selhurst Park after being two goals down.

Goals from Andros Townsend and Patrick van Aanholt put the hosts in a commanding position, but United struck back early in the second half through Chris Smalling.

It wasn’t long before the tide of the game had firmly turned in Man Utd’s favour as Romelu Lukaku found an equaliser, but it took until injury time for the visitors to find a winner.

And it was undoubtedly worth the wait for the travelling supporters as Nemanja Matic scored from 25 yards out with a stunning strike to seal all three points for the Red Devils as they move back up to second place in the Premier League table ahead of Liverpool.

Matic gets our Man of the Match award thanks in large part to his sensational effort to win the game, but overall, it was a disappointing performance from many of the Man Utd players around him.

Victor Lindelof looked suspect at the back, Paul Pogba and Alexis Sanchez didn’t have a positive impact on the game and Scott McTominay didn’t have a great outing.

As a result, Jose Mourinho will be delighted that they’ve managed to come away with a win in the circumstances, while there some impressive statistics, as seen below.

The first undoubtedly shows how things turned after the half-time break, as whatever Mourinho said during the interval worked wonders for his side.

United looked a different side and used the momentum to their advantage while Palace tired badly, and it shows in the numbers below. Meanwhile, it kept an impressive record against the Eagles intact, who have had a miserable time against the Manchester giants over the years.

Man Utd had 2 shots on goal in the 1st half tonight – the FEWEST any away team has had in a half of football at Selhurst Park this season.

They had 15 shots in the second half – the MOST of any away team in a half at Selhurst this season. pic.twitter.com/OmexWI151u

What a way to win it.

It’s the first time since October 2013 that Man Utd have won a Premier League game that they have been losing at half-time.

As expected, supporters were thrilled after the game, with the result undoubtedly making up for a very first poor first half and some disappointing displays across the pitch.

Had United dropped more points, it would undoubtedly have been a different story with the focus on the likes of Pogba and Sanchez, but instead they celebrate with three points ahead of facing Liverpool at Old Trafford on Saturday.

NOW THAT IS MANCHESTER UNITED, ALL OUT ATTACK

LIFELONG CONTRACT AND PUT HIS FACE ON THE MANCHESTER UNITED CREST! pic.twitter.com/6HgDRUBrbT

What a comeback ???
Still unbeaten against Crystal Palace in Premier League

The best comeback after SAF era. Can’t believe that we won and I’m still screaming!
What a night!

BEST COME BACK EVER!!! MATIC SCREAMER!!