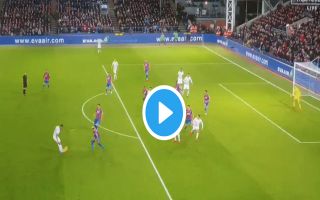 Man Utd were given a lifeline as Chris Smalling found the back of the net against Crystal Palace early in the second half at Selhurst Park.

The hosts had taken a two-goal lead through Andros Townsend and Patrick van Aanholt, leaving Jose Mourinho with plenty to think about.

He responded by bringing on Marcus Rashford who looked an immediate threat, but it was Smalling who became the unlikely hero to give them hope of launching a comeback.

Antonio Valencia chipped in a brilliant delivery into the box, and it was the unmarked centre-half who took full advantage and produced a nice finish to direct his header into the back of the net.

Mourinho’s men still have it all to do having looked so poor in the first half, but they’ll be given a massive lift and a way back into the game with this goal, with Smalling likely to have silenced a few critics for the time being having made an impact at the other end of the pitch…