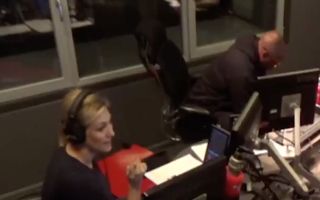 It’s a difficult time to be an Arsenal fan right now, and it sounds as though their current struggles have hit this particular Gunners supporter hard.

Having phoned in to discuss his side’s loss at Brighton on Sunday, club legend Ian Wright was left visibly upset himself as the fan conceded that he was ‘heartbroken’ to see Arsenal in their current state.

Arsene Wenger’s side have now lost five of their last six in all competitions, losing in the Carabao Cup final to Manchester City while slipping 13 points adrift of the top four in the pursuit of a Champions League qualification spot.

In turn, it looks set to be a miserable campaign for the north London giants, as they also face a daunting trip to AC Milan in the Europa League this week.

It’s understandable that fans are frustrated, angry and sad over the way in which they continue to fall short of their rivals in a bid to win major honours, and this particular fan couldn’t hide his emotions.

He sounded extremely upset throughout the call as his voice started to crack midway through. That was enough for Wright to take off his headset and shake his head as he clearly feels for the fan in question and will be just as gutted about Arsenal’s struggles given his close connection with his former club.

It’s a sad time for Arsenal right now, and it remains to be seen whether or not it gets better or worse between now and the end of the season as they need something significant to cheer about and get behind the players in the coming weeks.