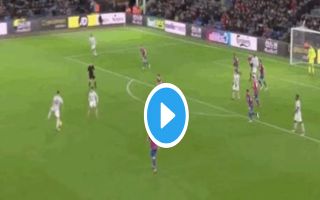 Man Utd completed an incredible comeback on Monday night in a 3-2 win over Crystal Palace at Selhurst Park, with Nemanja Matic scoring a late winner.

The Red Devils were 2-0 down, but goals from Chris Smalling and Romelu Lukaku drew them level before Matic stepped with a stunning strike in injury time, as seen below.

It looked bleak for the visitors at the break, as they looked devoid of any real class in the final third and were seemingly set for a miserable Monday night.

However, they came out in the second half and got the early goal needed to find a way back into the game with Lukaku drawing them level and seemingly giving them belief that it could be done.

It looked like the two sides were heading for a share of the spoils heading into injury time, but Matic had other ideas as he sent a rocket into the back of the net to spark wild scenes amongst the United players and supporters.

It’s a crucial three points for United as they move back above Liverpool into second place ahead of the two sides facing off at Old Trafford this weekend.