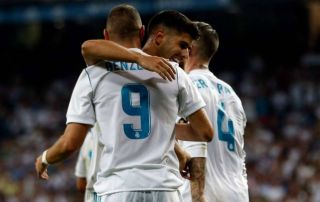 Real Madrid are firmly in control of their Champions League tie with Paris Saint-Germain, but it could have been much more comfortable for Zinedine Zidane’s side.

Los Blancos took a 3-1 lead into the second leg in the French capital, and so they were unsurprisingly trying to keep things tight at the back to avoid allowing their rivals a way back into the game.

Sergio Ramos went closest as he forced Alphonse Areola into a smart save from a corner, but the best chance of the opening 45 minutes undoubtedly went to Karim Benzema.

The Frenchman found himself with time and space in the box to take on Areola in a one-on-one situation, but he managed to fluff his lines and ended up winning his side a mere corner.

Had he been more prolific, it may well have killed the tie as PSG would then have needed three goals just to take it into extra-time, but instead he was left to rue another missed opportunity.

Benzema, 30, has scored just eight goals in 31 appearances so far this season, and with that poor record in mind, it seems understandable as to why so many weren’t shocked he missed and lined him up for heavy criticism, as seen in the tweets below.

The B in Benzema is for Bottle

I am not sure one person on the planet fancied Benzema scoring that chance.

Benzema should have scored that.

Still wondering how Benzema managed to become a professional footballer.#PSGRMA

Benzema has been stealing a living for years ?

How Benzema still plays for Real Madrid I have no idea!

Karim Benzema is definitely up there with the most overrated players in the world imo. He’s only scored like 4 goals in one year and he’s still somehow at Real Madrid. Just had a great chance to finish the tie off but he missed.

If we bottle this. Sleep with your eyes open motherfucker @benzema

Benzema needs to actually go now. His time’s up at Madrid.