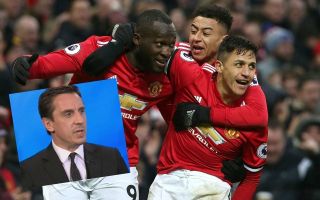 Manchester United legend Gary Neville has told manager Jose Mourinho how he should line up to get the best out of Alexis Sanchez and fit in his vast array of attacking options.

The Red Devils boss has something of a headache up front at the moment after bringing in Sanchez from Arsenal in the January transfer window, with the Chilean yet to really hit top form for his new club.

Sanchez looked a little better in last night’s win over Crystal Palace, having lined up on the left-hand side of a front three, with Jesse Lingard wide on the right.

Neville believes this is the best way for the club to line up, and has urged Mourinho not to use Sanchez on the right again after his struggles to get going in that position.

This is despite the 29-year-old playing there before to decent effect, though Neville clearly feels it’s important for Lingard to be first choice in the side as well, and that the pair could be at their most dangerous in those positions.

‘I don’t like Sanchez on the right hand side,’ Neville said on Monday Night Football.

‘I’m hoping that he’s on the left to be honest with you. Hopefully Jesse Lingard is over on the right.’

United also have the likes of Juan Mata, Anthony Martial and Marcus Rashford to fit in as attacking midfielders, so there’s no easy solution for Mourinho to make it all work.