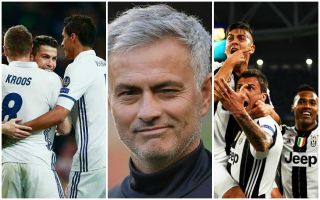 There’s mixed news for Man Utd on the transfer front, as they’ve reportedly been dealt a major blow while also being linked with a big-money swoop.

Reinforcements will be expected at Old Trafford as the Red Devils continue to trail Premier League leaders Manchester City by some distance at the top of the table.

While they have hope of silverware in the form of the FA Cup and Champions League, there are still question marks over this current United squad as they continue to show signs of faltering.

Jose Mourinho’s men were able to secure a last-gasp win at Crystal Palace on Monday night, but that was the most recent display in which they’ve struggled across the pitch to entirely convince.

In turn, it would come as no surprise if new faces arrived in the summer, but as per The Sun, Juventus forward Paulo Dybala might not be one of them.

It’s claimed that the 24-year-old will pen a new five-year contract with the Turin giants, earning him £120,000-a-week, and that will be music to the ears of all Juve fans given the Argentine’s influence on the side.

Importantly, it’s also added that there will be no release clause in his new deal, and so that gives the impression that Juve don’t have a figure in mind at which point they would be willing to listen to offers, such is his importance to the team.

Dybala has scored 18 goals and provided five assists in 31 appearances so far this season, as he has had to battle injuries too which have disrupted his campaign.

Nevertheless, with 60 goals in 125 outings in total since his 2015 move from Palermo, his impact has steadily grown at Juventus over the last three years and they’ll be desperate to keep him at the club for as long as possible.

While that’s the bad news, The Sun also claim, via Diario Gol, that Man Utd could launch a bid for £54m-rated Real Madrid defender Raphael Varane.

That’s the fee that the Spanish giants are keen to receive, as per the report, and with the Manchester giants linked with him, it could now lead to a deal being struck.

Mourinho has countless options in that department with Chris Smalling, Phil Jones, Eric Bailly, Marcos Rojo and Victor Lindelof at his disposal already, and so it could be argued over whether or not this is really a necessary signing.

However, they perhaps haven’t been as solid at the back as he would like, which was seen against Palace, and so Varane could address that problem this summer with the pair knowing each other well from their previous stint together in the Spanish capital.