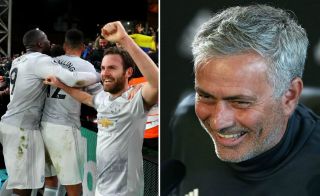 The Serbian scored a stunning stoppage time winner for the Red Devils as they completed a memorable comeback from 2-0 down to emerge 3-2 winners at Selhurst Park.

MORE: Mourinho reveals what he said to Man Utd players at half time before stunning Crystal Palace comeback

Matic scored the pick of the goals with a volleyed thunderbolt moments from the end to seal the win, though Mourinho clearly feels it wasn’t his best performance overall.

The Portuguese tactician made it clear he wasn’t happy with some of his team’s performance on the night, particularly in the first half.

Still, United showed character to turn it around and Matic deserves plaudits for taking a gamble to score a rare goal – and his first for United – to deliver the three points from an unlikely position.

Mourinho, however, trolled his player as he gave his post-match interview to Sky Sports, joking: ‘I hope you were not man of the match?’ according to the Metro.

Matic responded that he was not, with the award eventually going to Chris Smalling, who also scored a crucial goal to reduce the deficit to 2-1 early in the second half.