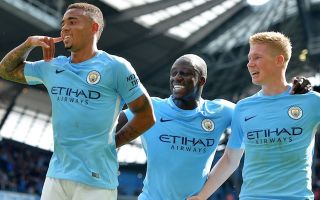 Benjamin Mendy has been pictured back in Manchester City training for the first time since September.

The Frenchman was injured during a 5-0 win over Crystal Palace in September and has not featured for Pep Guardiola’s side since.

A report from the Sun has stated that the left-back is looking to recover from the knee ligament damage he suffered in September in order to find form ahead of the World Cup in Russia this year.

Mendy’s severe injury means that he has missed the majority of his debut season in Manchester since signing form Monaco in the summer. The defender completed a deal which saw him sign for Guardiola’s side for an astonishing £52m. (Fee per the Guardian)

Mendy however has still managed to cement himself as fan favourite with City fans due to his hilarious social media posts and constant presence around the City squad.

With France’s national team possessing so much quality in depth Mendy will be hoping that he will be able to get enough games under his belt come the end of the season in order to allow him to regain a position in the French squad just in time for the World Cup in Russia this summer.