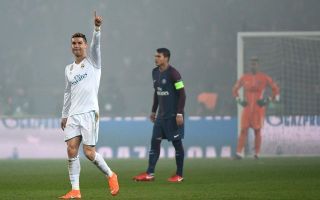 Real Madrid comfortably secured their place in the Champions League quarter-finals with a 2-1 win, 5-2 on aggregate, over Paris Saint-Germain in their last-16 tie.

The Spanish giants led 3-1 from the first leg at the Bernabeu, and Cristiano Ronaldo further strengthened their position with a key away goal in the second half.

Edinson Cavani struck back for the hosts, only for Casemiro to add a second for Madrid, while Marco Verratti received his marching orders in a feisty encounter in Paris.

Nevertheless, it’s Zinedine Zidane and his men who advance to the last eight, and he’ll be delighted with various key individuals including Ronaldo who were crucial in securing the win on Tuesday.

The Portuguese international led the way after finding the back of the net, but there was some delightful build-up play between Marco Asensio and Lucas Vazquez who both impressed throughout the encounter.

However, the defensive pairing of Sergio Ramos and Raphael Varane shone to keep things tight at the back, while Karim Benzema was poor.

In contrast, Verratti scores badly with us given his red card, while Angel Di Maria and Kylian Mbappe among others weren’t able to have the desired influence on the game.

It was another failure for the Parisian giants, as it’s the sixth consecutive year back in the Champions League that they’ve failed to progress beyond the quarter-finals, this time falling one hurdle earlier as they did last year to Barcelona.

As for the statistics on the night, the best belonged to Ronaldo who bagged his 15th goal in his last nine appearances for Real Madrid, while equalling an impressive Champions League record too.

Further, that’s now 53 goals scored in this competition away from home for Ronaldo, which is unsurprisingly the most in the history of the CL for an individual.

9 – Cristiano Ronaldo is the second player in #UCL history to score in nine consecutive games (14 goals), after Ruud van Nistelrroy for Manchester United in 2003 (12). Monster. pic.twitter.com/oUiaZLqYHi

Cristiano Ronaldo has scored 15 goals in his last 9 games for Real Madrid in all competitions. ??? #UCL pic.twitter.com/eO180Rgu6U

Cristiano Ronaldo has scored in all eight of his Champions League games this season, netting 12 goals. ?

Scored 53 Champions League away goals, the most in the history of the competition. ?

Naturally, supporters were delighted with the result and advancing to the quarter-finals, as seen in the tweets below.

Much was made of Zidane’s starting line-up given Isco, Toni Kroos, Luka Modric and Gareth Bale were all on the bench, but through a combination of injuries and tactical decisions, the French tactician got it right on the night it seems.

Now, the reigning champions will await the draw next week to determine who they will face next as they eye further glory in the Champions League.

What more can they say, 1 team alone rules in this competition! ¡Hala Madrid! #PSGReal pic.twitter.com/rN4FhOnvY9