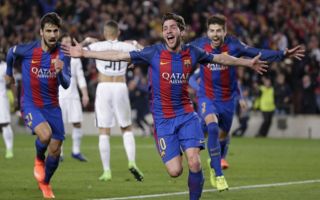 Barcelona and Portuguese midfielder Andre Gomes is set to depart the Spanish side in the summer should his performance not improve.

This is according to Spanish news outlet Diario Gol, who are stating that the former Valencia ace, who joined the club last summer from Valencia in a deal that cost the club an initial fee of €35M as per the BBC, will be leaving the club in the summer transfer window should his displays for the club fail to improve.

The news outlet are also reporting that the midfielder has lost the faith of superstar Lionel Messi, however manager Ernesto Valverde still believes he can get the player to improve.

Since his arrival in Catalonia from fellow La Liga side Valencia in the summer of 2016, Gomes has failed to make an impact for Valverde’s side.

In 71 appearances for the Blaugrana, the Portuguese international has only managed to bag himself a measly three goals and four assists, a return that should raise a few concerns for the Spanish giants.

This campaign, the 24-year-old has failed to get himself on the scoresheet thus far, with Gomes only managing to amass one assists in 24 appearances in all competitions.

During his time at Valencia, Gomes was very impressive, with the midfielder managing to be recognised as one of the brightest young talents in the league, however since his move to Barca, this ability is yet to be found.

Should Gomes be made to leave the club in the summer, it’ll be interesting to see which club the midfielder ends up at.