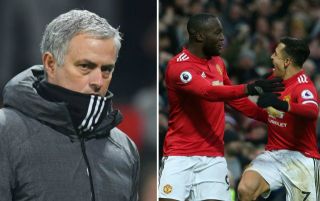 Manchester United manager Jose Mourinho has been given some controversial advice ahead of the Liverpool game.

The Red Devils look in need of some tweaking in their starting line up as they host their major rivals at Old Trafford, with Mourinho being urged to DROP under-performing star Alexis Sanchez.

The Chile international has not really got going at United so far since his January transfer from Arsenal, and it’s unclear what his best role in the team really is.

Pundits are increasingly questioning if Mourinho really had a plan for Sanchez and if he really fits in at United, or if the Portuguese simply wanted to get one over old rival Pep Guardiola by beating Manchester City to his signature.

Writing in the Sun, Neil Custis now says it may be time for Mourinho to axe Sanchez for the visit of Liverpool.

‘He may earn the big bucks but what  United need right now from Sanchez is a big performance,’ Custis wrote.

‘That or Jose Mourinho needs to make a big call. And you would not blame him for doing just that this Saturday and putting the  Chilean superstar  on the bench.

‘You cannot have under-performing players in any Premier League game and  certainly not if you’re  hosting  Liverpool at Old Trafford.’

He added: ‘He needs to do an awful lot more if he wants to stay in this United team. As it stands, Kop boss Jurgen Klopp will be delighted if he is in it come Saturday.’