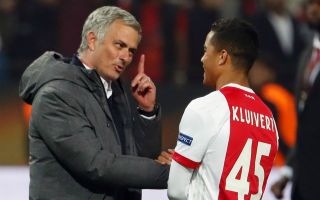 Ajax wonderkid Justin Kluivert has finally revealed the details of his chat with Manchester United manager Jose Mourinho amid rumours linking him with a transfer to Old Trafford.

The 18-year-old is one of the most exciting young players in Europe at the moment and more than a few eyebrows were raised when Mourinho engaged in a long and enthusiastic conversation after last season’s Europa League final.

Kluivert has since been linked with United, with the Daily Mirror the Red Devils have held talks over bringing the young Dutchman to Old Trafford.

However, it seems at least that their chat on that day had nothing to do with Kluivert moving to Manchester, with the player himself explaining it was merely a catch-up of sorts.

Mourinho was keen to talk to Kluivert as he knew him when he was a baby, with the Portuguese understandably having ties with former striker Patrick Kluivert, the player’s father, from his time working at Barcelona.

‘He said it was nice to see me again after such a long time, because he had known me when I was a baby,’ Kluivert told FourFourTwo.

‘And he said it was nice to see that I was doing well.’

United could do with a player like Kluivert in attack after a disappointing season in which they have largely failed to find enough spark in the big games to keep up with runaway league leaders Manchester City.