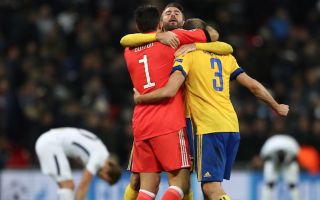 Tottenham crashed out of the Champions League after a late comeback from Juventus.

Spurs had their hearts broken at Wembley despite looking comfortable at half-time.

Heung-Min Son had given Spurs the lead on 39th minute to give them a 3-2 lead on aggregate. However, the second-half saw Juventus come out with a hunger that was not seen in the first half.

Gonzalo Higuain equalised for the Serie A champions on the 64th minute before Paulo Dybala scored a winner on 67th minute.

Harry Kane saw a last minute header hit the post as Spurs were unable to answer the deficit presented to them.

Gonzalo Higuain not only scored the goal to draw the sides level but he also assisted Dybala’s winner. While the Argentine was isolated at times, he made the very most of the opportunities he was presented with.

02:49 – Juventus have scored with their first two shots on target in this match, with just two minutes & 49 seconds separating the two goals. Quickfire. #TOTJUV

Tottenham are replacing Arsenal in all respects – they’ve just gone out in the last 16 in the Champions League.

Can they really push on now and finish 4th in the EPL?

Tottenham-Juventus 1-2 FT.
Luck is an aleatory concept in football. Surely Juve got lucky, but Tottenham left room for their luck to happen. They took the same unnecessary defensive risk for the whole game, and half an hour to go you have to be clever enough to realize it