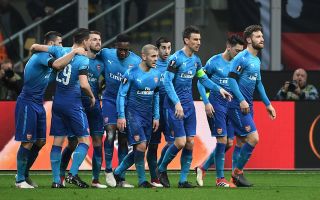 Arsenal beat AC Milan in the first tie of the Europa League clash thanks to goals from Aaron Ramsey and Henrikh Mkhitaryan.

Mkhitaryan gave Arsenal the lead on the 15th minute after latching onto a superb Mesut Ozil assist. The goal is the Armenian’s first in an Arsenal shirt since signing from Manchester United.

Aaron Ramsey doubled the lead for Wenger’s men just before half-time when the Welshman finished off a  superb team goal.

MAN OF THE MATCH

After a disappointing performance at the weekend against Brighton, Mesut Ozil starred in an outstanding individual performance. The German pulled all the strings in the centre of the park and created both Mkhitaryan and Ramsey’s goals. A superb nights work from Arsenal’s number eleven.

STAT OF THE MATCH

Mesut Özil has now been directly involved in 100 goals for Arsenal in all competitions since joining them in 2013:

A superb performance from Arsenal after a run of awful form…

‘Not a big game player’ Ozil has now got two goals and four assists in Arsenal’s last six European games away from home.

After the week we have had we needed that, superb performance, that’s all we ask for as fans, a bit of pride on the pitch, it’s definitely been a worth while trip, get in Arsenal.