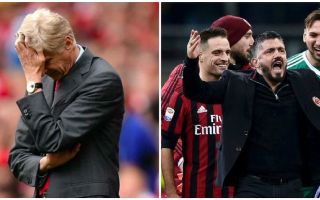 AC Milan and Arsenal clash in the Europa League last-16, and while the Gunners have enough problems of their own, they will have to be wary of Milan’s strengths too.

Arsene Wenger has seen his side lose their last four in all competitions, while they’ve been porous at the back which has ultimately been their downfall against the top sides.

In turn, he’ll have to find the solutions quickly from within the group he has at his disposal, and there will be some obvious and some less obvious threats from Milan to their chances of advancing to the quarter-finals of the competition.

The Rossoneri have been in fine form in recent weeks, going 13 games unbeaten in all competitions while going six consecutive games without conceding.

Further, they’ve reached the Coppa Italia final and are now seemingly back in the hunt for a top-four finish in Serie A after a difficult start to the campaign under former boss Vincenzo Montella.

For Arsenal though, there are five major reasons for concern in terms of their hopes of progressing in Europe.

Despite bringing in new signings Andre Silva and Nikola Kalinic last summer, it’s a Milan youth product who has emerged as their biggest goalscoring threat this season.

Cutrone, 20, has scored 14 goals in 33 games for Milan this season, and given his movement and cleverness in the box, he has already been drawing comparisons to a club hero in Filippo Inzaghi given the similarities in their respective styles.

The Spaniard is a very different player to the one that left Liverpool in 2015, as he has emerged into a creative spark for Milan for a couple of seasons now.

He’s registered eight goals and 11 assists in 36 outings so far this year, and he will look to be a constant menace on the right flank and cutting in with his preferred left foot.

Along with Suso and Hakan Calhanoglu, the 28-year-old is a player who makes Milan tick through the middle with his technical quality and eye for goal.

He’s only got six goals this season, but he will be key in Milan’s build-up play and so Arsenal will have to find a way to keep him quiet.

Not an attacking threat, but the Italian international has been in imperious form in recent weeks and it promises to be a difficult challenge for the Arsenal forwards to find a way past him.

With the experience and leadership of Leonardo Bonucci next to him, Romagnoli is starting to move into a class of his own and he will be key in keeping things tight at the back for Milan who won’t want to concede an away goal.

The resurgence for the Italian giants didn’t start immediately after he was appointed, but his influence is very much etched all over this current group.

Milan have a tireless work ethic, play with intensity and haven’t been found wanting for determination or energy over the last two months. It starts from the top, and Gattuso will look to prove that experience isn’t the decisive factor between him and Wenger.

He has brought the team together and got the best out of key individuals, while also proving that he’s got a decent tactical brain too to go along with the grit with key decisions in their impressive unbeaten run.

Circus over next Spurs manager continues as key figure thinks he can persuade Daniel Levy to change his mind Jun 19 2021, 18:21
Tottenham FC