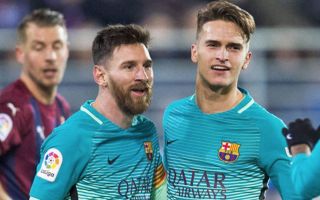 A Serie A club have reportedly shown extreme interest in signing a Barcelona star.

READ ALSO: Real Madrid and Barcelona to go to war over signature of £38m superstar

Napoli are reportedly closely monitoring the situation of Barcelona star Denis Suárez who is a main target.

A report from the respected Italian outlet CalcioMercato have stated that the Italian giants have set their sights firmly on Suarez’s signature with the Serie A club making the Barcelona midfielder one of their main targets.

The report states that Suarez has a release clause of €50m. The 24-year-old has allegedly been linked with a move to the Stadio San Paolo for a number of continuous years.

Suarez can often struggle to find playing time amongst Barca’s immensely talented midfield and a move away from the Camp Nou could certainly allow him to fulfil more time on the pitch.

While still a young age the Spanish midfielder has been at a number of clubs, which even includes Premier League side Manchester City while he was a youth player.

While Napoli are looking to push Juventus to the Serie A title this season, Barcelona’s focus will heavily be on next week’s Champions League clash with Chelsea.

After drawing 1-1 with Antonio Conte’s side at Stamford Bridge, all is still to play for with Barca set to host the Blue at the Camp Nou next week.

The awful Arsenal signing that convinced former head of recruitment to leave the “absolute mess” at the Emirates Jun 24 2020, 11:33
Arsenal FC