Chelsea goalkeeper Thibaut Courtois is reportedly one of a number of big names to have contacted Real Madrid president Florentino Perez about a summer transfer.

Don Balon claim that as many as five big-name players are determined to take this chance to move to the Bernabeu this summer as they’re aware of Perez’s desire to embark on a major squad revamp.

Despite recently getting past Paris Saint-Germain in the Champions League, it has been a largely disappointing season for Madrid, with their La Liga form understandably a big concern.

Still, Real remain one of the biggest names in the footballing world and it’s little surprise that the best players in Europe are reportedly queuing up to join them.

Among those is Courtois, say Don Balon, though Perez’s preferred option to strengthen in goal is said to be Manchester United’s David de Gea.

This is a worrying development for Chelsea, who are yet to tie their goalkeeper down to a new contract, of which he’ll be in the final year next season.

The Belgium international is one of the best players in the world in his position and has publicly admitted he misses his family, who are based in Madrid. 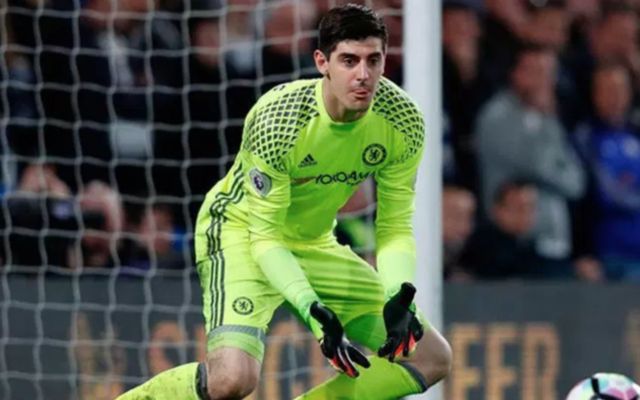 ‘If Real is really interested, my personal situation could affect, yes,’ Courtois was recently quoted by the Independent.

‘My personal situation is related to the city of Madrid, it’s known. My two children live there with their mum. I have my daughter every day on Facetime. She often tells me that I miss her. My son is still too small to communicate like that.

‘Whenever I have the opportunity, I try to make a return trip to Spain. As a situation, it is not always easy. Yes, my heart is in Madrid. It is logical and understandable.’

Chelsea would struggle to replace a top ‘keeper like Courtois and Don Balon’s report that he’s doing his bit to engineer a move to Madrid should prove a major concern to Roman Abramovich and co.