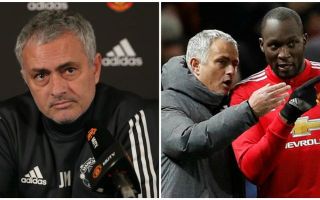 Man Utd boss Jose Mourinho addressed the media on Friday afternoon ahead of his side’s clash with Liverpool on Saturday.

It’s a crucial clash between the two old rivals as they continue to battle for second place in the Premier League, with the Red Devils currently two points ahead.

In turn, there’s a huge importance to the result this weekend, with Mourinho delivering positive injury updates to supporters, while also talking about the rivalry between the two sides and the comments from forward Romelu Lukaku this week on him being a ‘sergeant’ for the Portuguese tactician on the pitch.

Mourinho on injuries: “He [ Eric Bailly] as fully fit for a couple of weeks, he’s ok, the only one that is back to the team is Fellaini.”

Eric Bailly is fully fit and pushing for his first PL start since November. Fellaini is back in the reckoning. #MUFC

Mourinho on Lukaku: “He is an important guy for me. He is one of the guys that I trust. I love the attitude and the character. So when I say to a striker, ‘go there and do that job for me’, then he is a sergeant. He is a guy that you can trust. His attitude is phenomenal.”