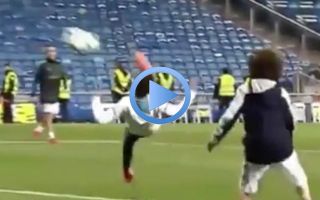 Real Madrid star Lucas Vazquez was provider for Cristiano Ronaldo in their win over Paris Saint-Germain this week, but he’s also assisting for Ronaldo Jr too.

Los Blancos powered their way into the quarter-finals of the Champions League this week, securing a 2-1 win in the French capital to advance past PSG 5-2 on aggregate.

During the second leg, it was Ronaldo who scored the all-important away goal to effectively kill the tie in favour of Madrid, but it wouldn’t have happened for the Portuguese ace had it not been for a perfect delivery from Vazquez.

As seen in the video, following some nice play in the build-up from Marco Asensio, it was Vazquez who crossed the ball into the box for Ronaldo to rise high and head home.

Ronaldo’s goal for your pleasure: pic.twitter.com/045RPlDoGS

It seems as though he isn’t just limited to providing assists for his Madrid teammate, as seen in the video below which shows Vazquez putting it on a plate for Ronaldo Jr, who manages to produce a brilliant overhead kick finish.

Based on the evidence below and previous bits of video that have been released of Ronaldo Jr playing football, he looks like he’s ready to follow in his father’s footsteps. What a finish…