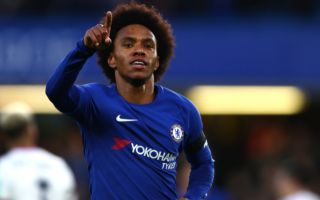 Chelsea beat Crystal Palace 2-1 at home in the Premier League this evening to close the gap on rivals Spurs in the race to secure Champions League football for next season.

The Blues went ahead thanks to a goal from Willian, after the Brazilian fired home from the edge of the box to keep up the good form he’s been in in recent weeks.

The home side then doubled their lead thanks to own goal from former Liverpool star Martin Kelly, a goal that all but wrapped up the result for the west London side.

Crystal Palace pulled one back with a minute to go however it wasn’t enough as the Blues held on for all three points.

The win now means that the Blues are just two points behind London rivals Spurs in the race to secure Champions League football for next season.

Brazilian forward Willian was absolutely class this evening, with the winger looking dangerous nearly every time he picked up the ball for Antonio Conte’s side.

The forward even picked up a goal for his troubles, as he kept up his recent good form going into his side’s crucial Champions League clash against Barcelona on Wednesday.

This tweet sums up the player’s performance this afternoon.

I wish Willian played like this consistently throughout his Chelsea career. He has been top class.

It seems that Willian is having the season of his life!

13 – Willian has scored 13 goals for Chelsea in all competitions this season – his best ever return in a single campaign for the club. Samba.

My god Willian is just a class apart ???

Willian is a class player in what is a below a average, very poor load of dross. #CheCry

Willian is so underrated. He is class! #Chelsea @willianborges88

That was top class from Willian. Him and Douglas costa have a very similar way of playing. Devastating on the counter.