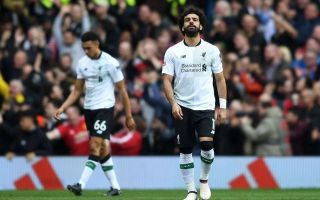 Man Utd secured a 2-1 win over Liverpool on Saturday, and it wasn’t all about goalscoring hero Marcus Rashford for supporters.

Naturally, the 20-year-old would have taken the bulk of the praise having scored twice in the opening 24 minutes to ultimately win the game for the Red Devils.

However, particularly after Eric Bailly’s own goal, the home side had to stand firm and withstand plenty of pressure to hold on for all three points.

Jose Mourinho will undoubtedly be delighted with how his team defended as a collective rather than singling out individuals, but supporters were under no illusions over what a great job Ashley Young did in keeping Mohamed Salah quiet.

The Egyptian international has bagged 32 goals and 11 assists in 39 games so far this season, and so he has undoubtedly been Liverpool’s main danger man this campaign.

Despite that, he wasn’t able to have a decisive impact on this game, and that was in large part down to Young’s defensive work on United’s left flank to limit his influence.

What makes it more impressive is that it isn’t his natural position, but as he continues to keep Luke Shaw out of the starting line-up, it’s performances like the one against Liverpool which are proving Mourinho right in selecting him.

As seen in the reaction below from fans, they certainly appreciated the shift that the stalwart put in…

Ashley Young has had Salah in his pocket all game!

Ashley Young showing why Luke Shaw can’t get a kick.

Ashley Young has been superb against Mo Salah.

Credit where it’s due…Ashley Young has tracked Mo Salah excellently all game. Needs to keep it up! Come on Reds!

Mohamed Salah, one of the best players in the league this season with 31 goals in all competitions, pocketed by United’s 2nd choice left back Ashley Young, who isn’t even a left back. I love this game.

RT and pass it on. pic.twitter.com/AgLWlyTPfj

Never forget that on Saturday the 10th of March, Ashley Young played left back, put in a blinder, and pocketed the Best African Player in the History of the Premier League, Mo Salah.

We are all witnesses.