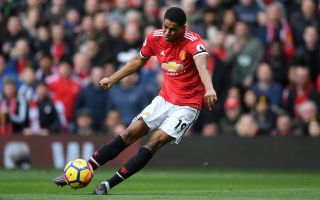 Man Utd secured a 2-1 win over Liverpool at Old Trafford on Saturday, with Marcus Rashford emerging as the hero for the home side.

The 20-year-old scored twice in the opening 24 minutes to put the Red Devils in full control, with his first in particular standing out given it was a superb finish to bend his effort round Loris Karius.

He stayed calmed and composed to slot home a second, but United opted to play very defensively in the second half and it was almost their undoing, especially after Eric Bailly’s own goal raised nerves.

However, they were able to hold on for the victory, and it could be crucial in their bid to finish in the top four in the Premier League and to claim second place in the standings.

The win moves them five points clear of third-placed Liverpool, and so Jose Mourinho will undoubtedly be delighted with the outcome.

Rashford unsurprisingly takes our Man of the Match award after his first-half double, as he showed real class and quality to find the back of the net and ultimately win it for his side.

There were important performances across the pitch for the home side, while in contrast, both Trent Alexander-Arnold and Dejan Lovren endured a nightmare opening half and score poorly in our ratings below as they simply didn’t deal with Rashford’s threat well enough.

It was a much-needed spark from Rashford, as he had gone 10 Premier League games without a goal prior to Saturday, as per the tweet below.

Meanwhile, Romelu Lukaku continues to show that there is more to his game than just goals, as he has now registered seven league assists this season, putting him in second place for Man Utd behind Paul Pogba who sat out injured this weekend.

Marcus Rashford ends a run of 10 PL apps without a goal, his 5th this season (had scored in only 2 of 13 starts).

Lukaku’s assist was his 7th in PL this season, 2nd only to Pogba (9) for Man Utd pic.twitter.com/VPJJzH15VQ

As expected, United fans were absolutely delighted with the win and three points, as the rivalry between these two giants of English goes back a long way.

It was undoubtedly a tense finish with six minutes added on, but the hosts were able to hang onto their lead for a crucial victory, and that leaves them in a strong position with eight games left in the season to win the race behind leaders Manchester City.

Supporters seemed particularly pleased with Ashley Young’s defensive work, preventing Mohamed Salah making a decisive impact on the game, as he has done so often already this season, while naturally Rashford also received plenty of praise following his match-winning display.

Ashley Young pocketing Salah for 90 minutes I LOVE THIS GAMEEEE

YESSS LADSSS I LOVE THIS GAME

Salah this, Salah that. Shut the fuck up! pic.twitter.com/uhGxHi8Nju