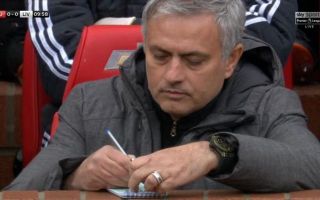 Man Utd came out on top in their showdown with Liverpool at Old Trafford on Saturday, with Marcus Rashford scoring twice in a 2-1 win for Jose Mourinho’s side.

It was a crucial win for the Red Devils, as it moves them five points clear of their bitter rivals, while they’re also now 12 ahead of fifth-placed Chelsea in the battle for a top-four finish.

SEE MORE: ‘Had Salah in his pocket all game’ – Man Utd fans rave about key player in win over Liverpool

As a result, Mourinho will be delighted with the result, and the media have been picking up on him playing a key role in the manner in which his side scored their goals and won it.

As seen in the images in the tweets below, Sky Sports cameras picked up on the Portuguese tactician scribbling away on his notepad in the first half before the first goal went in.

Both The Sun and The Mirror claim that it can be made out that his notes refer to winning the ‘2nd ball’ while also writing ‘Rom’ next to it, in an obvious reference to striker Romelu Lukaku.

It just so happens that the Belgian forward managed to win two aerial battles in the build up to the goals, with both Dejan Lovren and Trent Alexander-Arnold not exactly covering themselves in glory in terms of the way that they dealt with the threat down United’s left flank.

Rashford was able to capitalise on both situations with two well-taken goals, and so perhaps there is something in it from the reports above that Mourinho identified a weakness and exploited it brilliantly.

Still, it’s not entirely clear that’s what the notes meant and so it seems like a bit of stretch still. Nevertheless, the points were United’s and on they march with Lukaku and Rashford key in the victory.