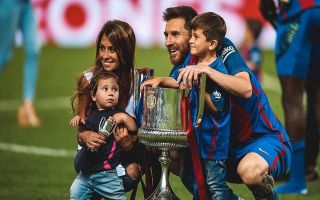 Barcelona confirmed on Saturday that Lionel Messi had withdrawn from their squad to face Malaga this weekend, and he has since revealed it’s because he’s celebrating the birth of his third son.

The Argentine icon already has two boys Thiago and Mateo, and as seen below, he has confirmed that he and wife Antonella Roccuzzo have welcomed baby Ciro to the world.

“Welcome Ciro! Thank God everything went perfect. Mom and he are very well. We are super happy.”

It’s great news for the Messi family, as he confirmed that mother and child were doing well, while the Catalan giants will hope to avoid any slip-ups without their talismanic forward involved at Malaga this weekend.

Barca opened up an eight-point lead at the top of the La Liga table last weekend with a crucial win over closest title rivals Atletico Madrid, and so they’ll be highly fancied to go on and win another league title in the coming months while they’re also in the hunt for a Copa del Rey and Champions League.

However, for Messi, it’s all about life at home this weekend as while he’ll probably be watching his teammates at some point, he’s putting together quite the future five-a-side team and he’ll be one happy and proud father having welcomed another baby to his gang.

It’s fair to say that he’s certainly winning in life both on and off the pitch, congrats Lionel!