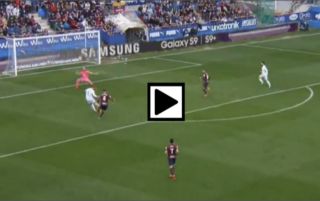 Madrid beat the Spanish minnows 2-1 away from home, with the former Man United winger bagging his 32nd and 33rd goals of the season in a campaign where he’s supposed to be ‘finished’ according to some supporters.

Ronaldo’s first goal was one of pure quality, after a fine cross-field pass from Luka Modric was excellently brought down and fired home by the Portuguese superstar to give the away side the lead.

The five-time Ballon D’Or winner then added his and Los Blancos’ second in the second half following an inch perfect cross from Spanish defender Dani Carvajal.

Ronaldo’s goals now mean that he has overtaken Lionel Messi’s goal tally for the 2017/18 season, with the Madrid star now on 33 goals and Messi on 32.

It was the 33-year-old’s 17th strike in his last 10 appearances in all competitions, a record that clearly shows that the forward is almost certainly back to his best with Zinedine Zidane’s side.

Here are Ronaldo’s goals from his side’s narrow 2-1 win against plucky Eibar.

WATCH: Half-time at the Ipurua Municipal Stadium!@Cristiano made @SDEibar pay from 12 yards with this fine finish from @lm19official‘s world-class through ball ? https://t.co/zm1317RIkd