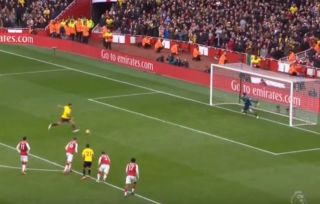 Arsenal goalkeeper Petr Cech has done it at last – the Czech Republic shot-stopper saved a penalty for the Gunners today as he denied Troy Deeney.

Arsenal had just gone 2-0 up moments earlier through Pierre-Emerick Aubameyang, but immediately looked like allowing Watford back into the game by conceding a spot-kick.

Cech’s record at saving these for Arsenal has been incredibly poor, but after 16 attempts he finally kept one out for Arsenal in extremely satisfying fashion.

Fittingly, Cech’s penalty save came against Watford forward Deeney, who made himself public enemy number one at the Emirates Stadium today after his notable criticism of Arsenal’s lack of ‘cojones’ in their game earlier this season.

On that occasion, Watford were the winners at Vicarage Road, but it looks as though Cech has preserved Arsenal’s 2-0 lead and set them on their way to three valuable points this afternoon.

Unsurprisingly, fans were absolutely loving the fact that Deeney fluffed his big moment and took to Twitter to ask where his cojones had got to…

imagine missing a penalty against cech. lack of cojones

Will be shocked if ‘cojones’ isn’t trending very soon

Who doesn’t have “cojones” now?

@T_Deeney left his cojones in Watford