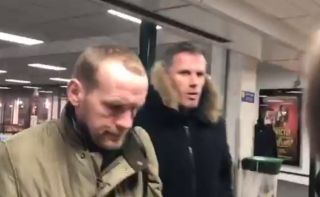 Jamie Carragher has made a somewhat bizarre attempt to defend himself after video footage emerged of him spitting at a Manchester United fan from his car window.

The former Liverpool defender had previously apologised on Twitter for his behaviour, and also made it known he’d spoken to the family and offered his apologies to them as well.

Carragher was being goaded by a United fan who was filming while driving next to his daughter, and Carragher ended up spitting at the 14-year-old rather than at the father.

The video is now all over the internet after being broken by the Daily Mirror last night, and they claim the former England international is set for crunch talks with Sky Sports after the incident.

Carragher has now been spotted arriving in London for those discussions, but would not comment on his position with the broadcaster.

He did, however, defend himself slightly by claiming he didn’t see the girl in the car, which seems somewhat baffling given she would presumably have been right by the window, even if she ‘leant back’ as he says.

When asked if he saw her, he said: ‘I didn’t to be honest, she was leant back. I wish she wasn’t involved. I hate that she was involved more than anything.’

Joey Barton has condemned Carragher over the incident while former team-mate David Thompson defended his behaviour.