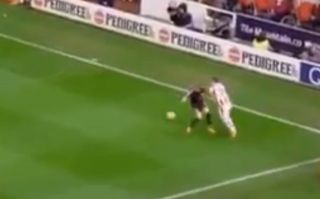 Manchester City may have the lead against Stoke City at the Britannia Stadium tonight, but the real victory is for Xherdan Shaqiri, who has produced the skill of the evening and perhaps of 2018 so far.

The Swiss winger is known for his show-boating and occasional wonder-goal, even if can he infuriatingly inconsistent with his performances – hence his being at Stoke rather than a far bigger club as was anticipated of him when he was a youngster.

Still, tonight the stage was truly his as Shaqiri produced this outrageously filthy moment against Manchester City defender Oleksandr Zinchenko.

The 21-year-old hasn’t been a regular for City this season but had looked a promising young talent until Shaqiri destroyed and humiliated him on live television.

Watch below as the Stoke ace produces an unreal nutmeg on Zinchenko before beating him for pace down the right-hand side as well.

It may not have led to a goal, but sometimes there are more important things in football.

That said, with the very real threat of relegation looming, Stoke fans could do with Shaqiri just bundling one in off his backside from two yards some time soon, even if us neutrals will happily eat stuff like this up.