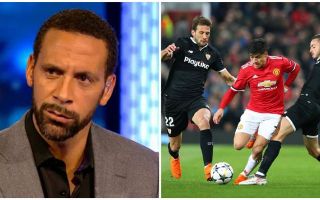 Former Man Utd defender Rio Ferdinand heavily criticised his old club after their defeat to Sevilla in the Champions League on Tuesday night.

The Red Devils crashed out of the competition after losing 2-1 at home following a goalless draw in Spain, and it was a bitterly frustrating night for them.

Wissam Ben Yedder scored twice off the bench, while Romelu Lukaku grabbed a consolation goal. Nevertheless, in a tie in which they were highly-fancied to advance from, they undoubtedly disappointed and have themselves to blame for their exit.

Ferdinand was scathing in his criticism after the game, as seen in the video below, while he also questioned Alexis Sanchez who has not performed to his usual high levels since arriving at the club in January.

While the BT Sport pundit insisted that he actually felt sorry for the Chilean international, they’ll all have to pick themselves up and continue to battle for a top four finish in the Premier League and the FA Cup between now and the end of the season.

“They looked like a team thrown together, full of strangers…”@rioferdy5 can’t believe what he has just seen at Old Trafford.

“He looks a shadow of the player he was, he looks a stranger in this team…”

“In some ways, I feel sorry for him.”@rioferdy5 discusses Alexis Sánchez after another below-par display for Manchester United. pic.twitter.com/tQadySYbjk