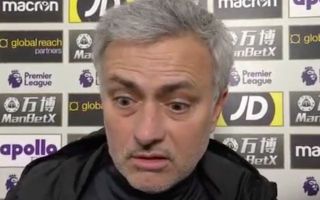 Man Utd crashed out of the Champions League at the hands of Sevilla on Tuesday night, and Jose Mourinho had everyone baffled with this comment.

The Spanish outfit secured a 2-1 win at Old Trafford to dump United out, with substitute Wissam Ben Yedder doing the damage in the second half.

It was a thoroughly frustrating and disappointing night for the Red Devils, as it came after such a great performance in their win over Liverpool at the weekend.

However, it’s been made worse after Mourinho had this to say after the game, which as seen in the reaction below, left some United fans furious and others confused as to what the Portuguese tactician’s point was…

Mou: “I’ve sat in this chair twice before, with Porto – Man Utd out, with Real Madrid – Man Utd out, so this is nothing new for this football club.” #MUFC

He’s firing shots at his own club ???

Feck sake. Some things you just don’t say out loud.

This is just as bad as anything LvG and Moyes said.

Well well well! As far as im a jose fan, i think not many fans are going to digest what he said! He actually fucked up a big chance to get us through to the quarters tonight and he has the balls to say these shits!

Wow! I really hate criticising this man but what a terrible comment to make, he needs to realise where he is what club he’s at! There’s no shame in going out of this competition but there’s a way of losing a football match that tonight was criminal

seriously what is he thinking, that’ll be 90% of the fan base against him… prepping early for 3rd season implosion with no real success to shout about.