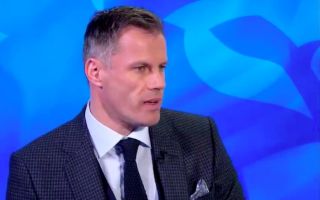 Jamie Carragher has made a desperate plea on his official Twitter page to get fans to stop aiming abuse towards the Manchester United fan he spat at in a video that went viral this week.

The former Liverpool defender was recorded spitting out of his car window into another car driven by a 42-year-old United supporter, though it was his 14-year-old daughter who got hit.

Carragher has since been suspended by Sky Sports over his actions, missing the Monday Night Football coverage of Stoke City vs Manchester City as a result.

The Daily Mirror now report that the fan, Andy Hughes, has been on the end of a great deal of abuse, including death threats, since the video went public earlier this week.

‘We have been feeling under siege. It has been really worrying,’ he said.

‘I have received threats, death threats and all kinds of abuse, and I don’t know how to deal with it. I worry for my ­daughter’s safety, I really do.’

I’ve made a big mistake & accept full responsibility. I am the only person to blame for this sorry situation, so please leave the family alone. https://t.co/HBuCBRyvJF

Carragher has now tweeted urging fans to leave him alone, in what looks like a situation that has spiralled massively out of control.

The nature of modern 24/7 news coverage means that this has attracted a huge amount of interest and reaction, but Carragher insists he is the only one to blame and wants no more grief for the family involved.