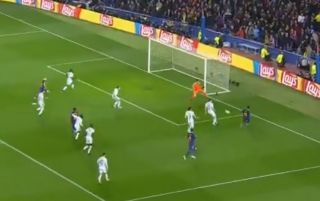 Lionel Messi has given Barcelona a 1-0 lead in tonight’s Champions League clash with Chelsea at the Nou Camp after cheekily nutmegging Blues goalkeeper Thibaut Courtois.

The Argentina international scored after just 127 seconds to give Barca a dream start against Chelsea, though in many ways it doesn’t change the task for Antonio Conte’s side tonight as they needed an away goal anyway.

Messi’s quality, however, may have dampened Chelsea spirits as their long run of keeping him at bay prior to the first leg match feels like a distant memory now.

It may have taken Messi some time to score his first goal against the west Londoners, but now he can’t stop and it didn’t take him long to beat Courtois tonight.

A dreadful start for Chelsea! pic.twitter.com/HqKrgG1S2V

The Belgian goalkeeper certainly should have done better on the goal, with Messi’s effort hardly the strongest and far from at an ideal angle for him.

However, his cheeky right-footed effort found its way through Courtois’ legs and into the back of the net to make it 1-0 on the night and 2-1 to Barcelona on aggregate.