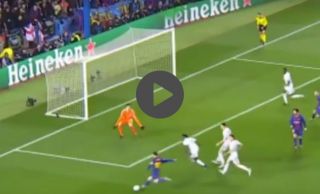 Lionel Messi scored the 100th Champions League goal of his career to make it Barcelona 3-0 Chelsea at the Nou Camp this evening as it all gets a bit one-sided.

The Argentina international opened the scoring earlier in the evening, netting after two minutes to score the fastest goal of his career so far.

But not content with just one record for the evening, Messi has now made it a century of goals in Europe’s top club competition with a stunning solo effort to surely send Chelsea crashing out of the competition.

Picking up the ball from Luis Suarez just outside the area, Messi expertly beat three Chelsea defenders before firing the ball under Thibaut Courtois for the second time this evening.

It was, quite simply, utterly sublime from a player who has throughout his entire career made defenders look Sunday League standard whether he’s playing La Liga cannon fodder like Eibar or Albacete or European giants like Chelsea or Bayern Munich.

It’s becoming so routine from him now that you can forget just how special he is, but this goal tonight is another reminder of what sets Messi apart from the rest.