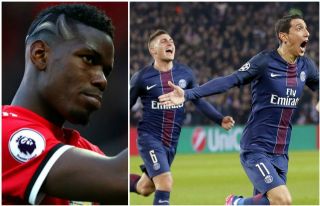 The Red Devils look likely to keep faith in the France international for the time being, but have not ruled out the prospect of offering him in exchange for Paris Saint-Germain midfielder Marco Verratti, according to the Independent.

Pogba has not looked at his best in recent times as he struggles to settle in an ideal role in Jose Mourinho’s side, raising questions over his future at Old Trafford.

Most recently, Pogba has been linked by Don Balon with a move to Real Madrid, with the Spanish outlet claiming he’d be ready to take a pay cut in order to quit Manchester for the Bernabeu.

The 24-year-old would certainly not be short of suitors from around Europe, having shown himself to be one of the finest players in the world at previous club Juventus.

CaughtOffside recently learned of United’s interest in PSG midfielder Verratti, and the Independent also report of interest even if a straight swap seems ambitious.

The Italy international certainly seems a more suitable fit in Jose Mourinho’s midfield, looking an ideal long-term replacement for Michael Carrick in that position as the club veteran nears retirement this summer.

A previous report from the Independent also linked United with an interest in Toni Kroos, another similar style of ball-playing midfield player.

Can Paul Pogba get back to his best for Manchester United?