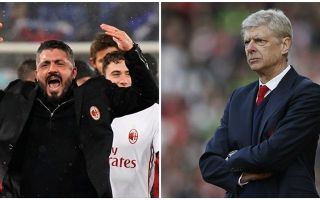 AC Milan have it all to do in the second leg of their last-16 Europa League tie with Arsenal on Thursday night, and Gennaro Gattuso could be considering a key change.

The Rossoneri fell short of the standards set in a 13-game unbeaten run prior to their 2-0 loss at the San Siro in the first leg, with the Gunners now holding a big advantage with those away goals.

Having announced their squad on Wednesday, Milan will be without right-backs Davide Calabria and Ignazio Abate, with both suffering with injury problems.

The former had his hands full in the first meeting with Henrikh Mkhitaryan and so perhaps a change was to be expected anyway, but Gattuso will not only be forced to replace him in the starting line-up, but according to MilanNews.it, the Italian tactician could also switch to a 4-4-2.

It remains to be seen whether Fabio Borini or Cristian Zapata gets the nod at right back, with the former playing in that role at the weekend in the dramatic late win over Genoa, but as per the XI below, it’s Zapata who could feature.

Further, Milan had major problems dealing with Arsenal’s ability to play between the lines in the first leg, with the likes of Jack Wilshere and Aaron Ramsey having a big influence on the game.

As a result, perhaps a switch to a four-man midfield to have two banks of four will help them in that regard at the Emirates.

However, having Hakan Calhanoglu on the left and Suso on the right will require a lot of defensive work from that pair, unless they are able to successfully pin back Arsenal’s full-backs for most of the game.

The last big change that will potentially come with this formation switch is up front, with match-winning hero from the weekend Andre Silva tipped to start alongside youngster Patrick Cutrone.

The duo will have to show chemistry and good link up despite not having played much alongside each other this season, but it’s certainly a strong Milan XI, and they’ll go out with nothing to lose which could make them a real threat to Arsenal still.