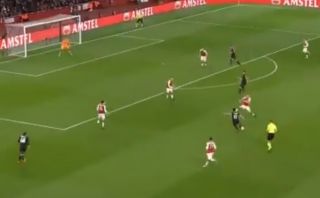 AC Milan took a 1-0 lead against Arsenal at the Emirates Stadium this evening through a long-range screamer by Hakan Calhanoglu.

The Gunners have since equalised through a Danny Welbeck penalty, but this stunning Calhanoglu goal gave them a real scare, even if only for a few minutes.

It’s now 3-1 to Arsenal on aggregate, and Arsene Wenger’s side have the added advantage of the two away goals at the San Siro from the first leg encounter.

Still, Calhanoglu’s sublime effort is a reminder of the threat Milan pose in most areas of the pitch, with Gennaro Gattuso’s side in largely fine form since he took over despite the recent setback against Arsenal.

Hakan Çalhano?lu from a long way out!

A trademark strike from the AC Milan man ? pic.twitter.com/2SIICdr2vG

With the game tied at 1-1 now it’s neatly poised, with Milan’s fine work on the opener surely giving them some encouragement that this tie isn’t necessarily over.

Still, they need two more on the night to go through and need to make sure they can keep Arsenal out again.

Below is the penalty from Welbeck and the decision that led to it being given – does it look fair to you?